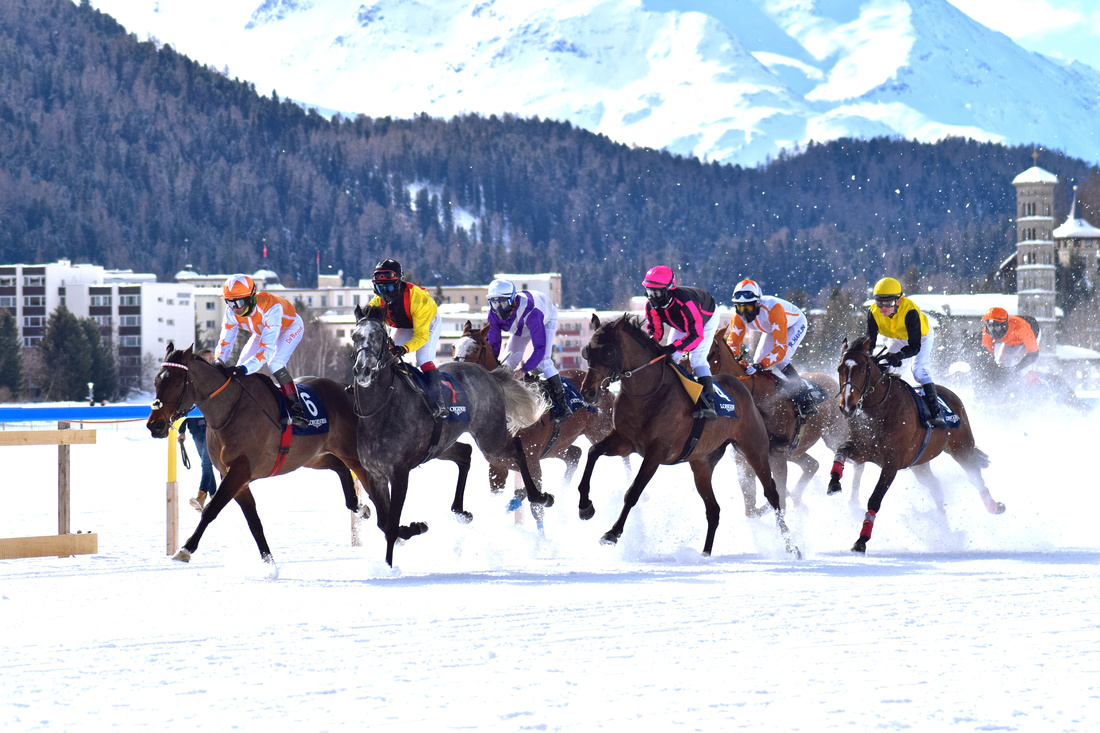 The most beautiful racetrack in the World?

Glamorous and chic, St Moritz, also known as ’Top of the World’ is one of Europe's finest ski resorts.  Lake St Moritz,1.6km at it’s longest point, 44 metres at it’s deepest is frozen between December and May.  Horse racing has taken place on the frozen lake since 1907 and has attracted wealthy tourists for betting and champagne drinking.  It now attracts over 35,000 spectators over three weekends in February.

Having picked up a brochure advertising White Turf horse racing whilst I was in St Moritz for snow polo, I’d felt an overwhelming lure pulling me back there.  On hearing that Kent trainer, John Best had three horses out in St Moritz, this pretty much confirmed my decision to go as I now had added local interest.

Finances were extremely tight and I watched flight and accommodation prices obsessively.  As the date approached, it was looking extremely unlikely that I’d be able to go.  I eventually found a good deal and booked less than 15 hours in advance of my flight, very last minute.  I decided to fly to Zurich and then take a day trip to St Moritz.

I arrived at Heathrow on Saturday 17th February 2018 in good time.  Once I’d checked in (in Chinese as the touch screen wasn’t working) I made my way to the departure lounge.  After a glass of wine it was soon time to board.  The flight to Zurich was impressively quick, a little over an hour flight time.  Having landed in Zurich, I took a double decker train from the airport to the city centre.  I checked into my accommodation; it was basic and shared but within the budget for this trip.

After 2 or 3 hours of broken sleep I was up and out by 0630.  A tram and a train and I was on my way.  Zurich train station is a pleasure to travel through.  It’s clean, tidy, has great shopping and Swiss transport has an excellent reputation for running on time.  I was happy to find a water fountain on the platform, one of over 1200 in the city centre providing drinking water 24 hours a day.  On board the 0707 towards Chur, I could tell I was on the right train as it was packed with snowboarders headed for the mountains.  The journey was absolutely beautiful with the scenery changing from city centre to Swiss villages and snow topped mountains.  Total journey time was around 3 hours including a change at Landquart. 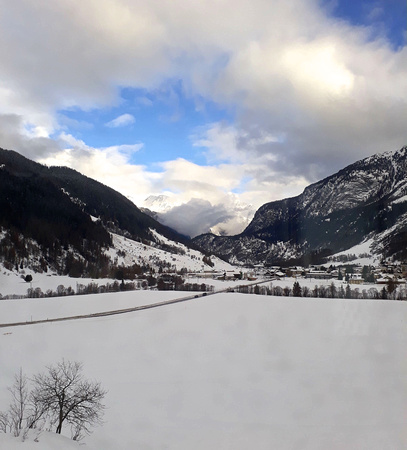 Stunning views from the train

I was so happy to be back at St Moritz again, the sun was shining, sky blue with patchwork clouds.  I made my way to the lake, where I spotted the John Best Racing team in their distinctive jackets.  I went and said hello and wished them luck with their horses; Berrahri, Malt Teaser and Eddystone Rock.

The first race was a harness trotting race at 1110.  I watched the horses in the parade ring for a few minutes and made my way trackside. 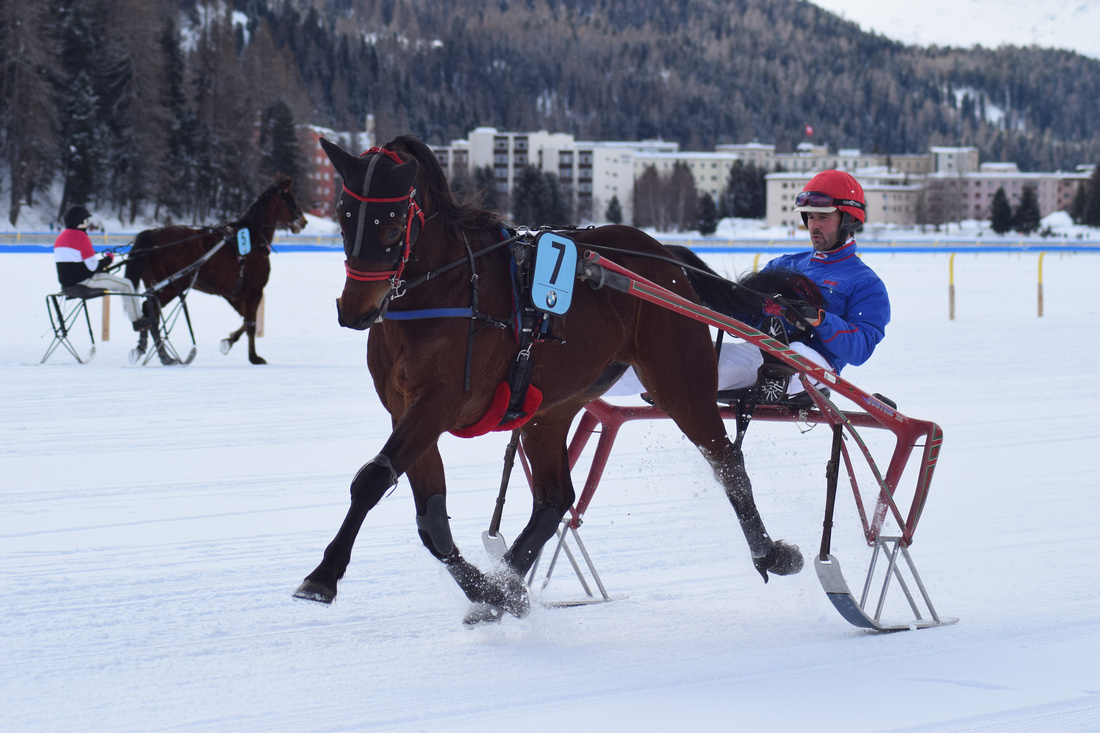 As I saw the horses come down the track to the start, number 7, Pipilo Jet stood out immediately and had I placed a bet it would have gone on him, he had fantastic movement.  He was first in the 1700m race with driver Heiner Bracher. 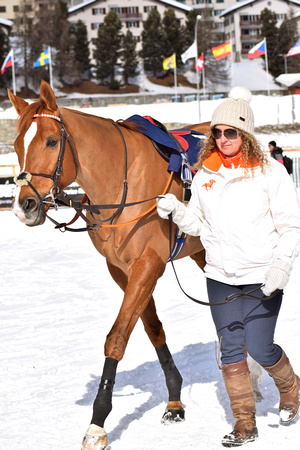 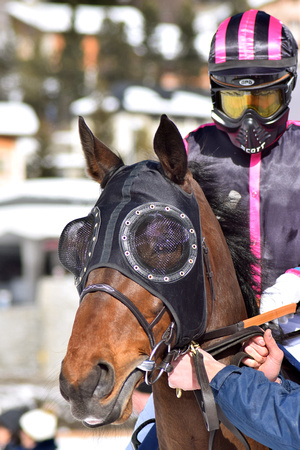 The 1220 was a big race; the Longines 79 Grosser Preis Von St Moritz with prize money of 111,111 Swiss francs.  I was cheering on John Best’s Berrahri ridden by jockey, Dayverson De Barros. 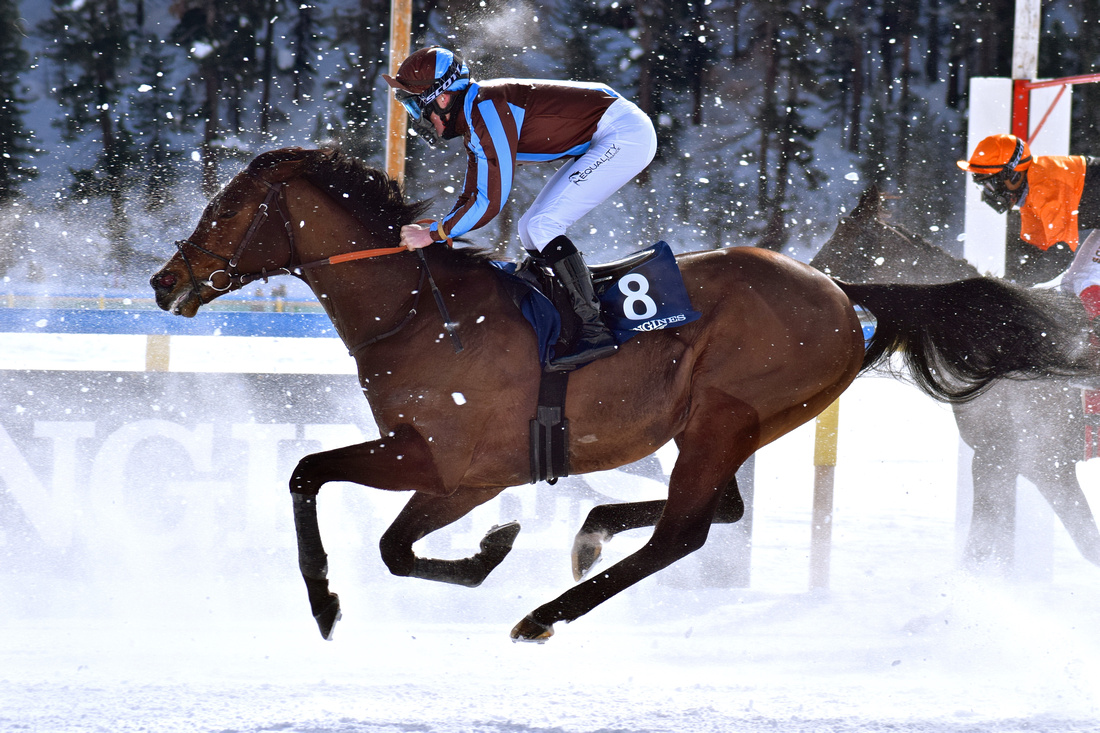 Eddy Hardouin on board Jungleboogie 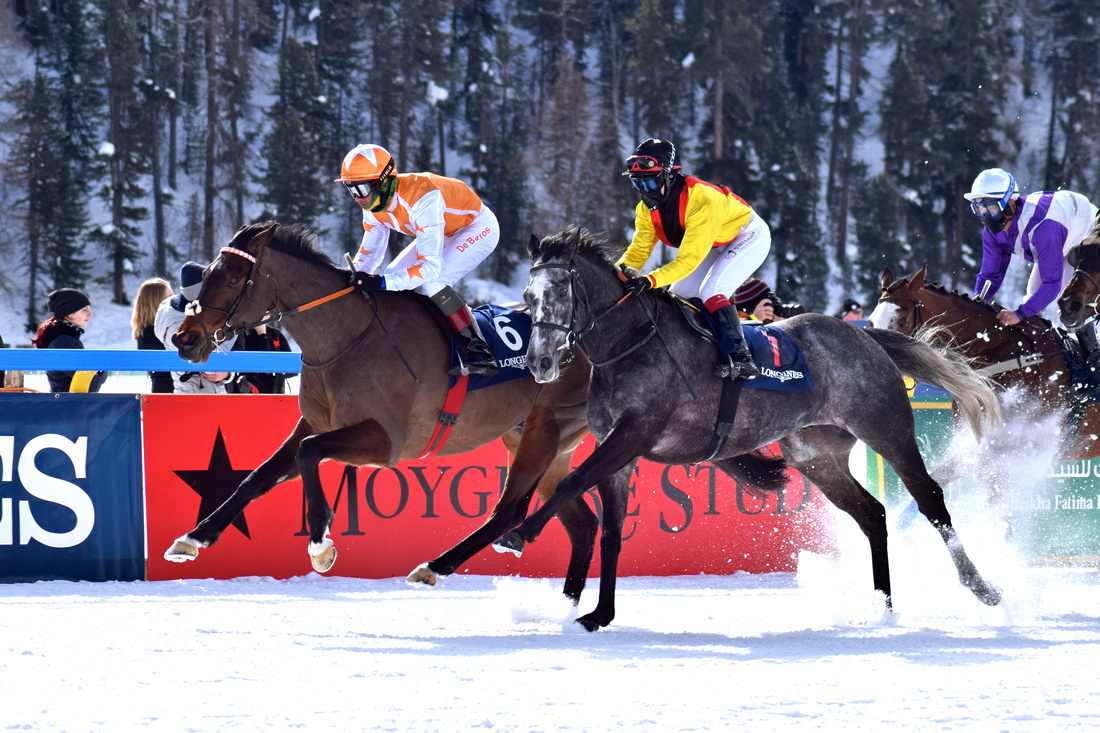 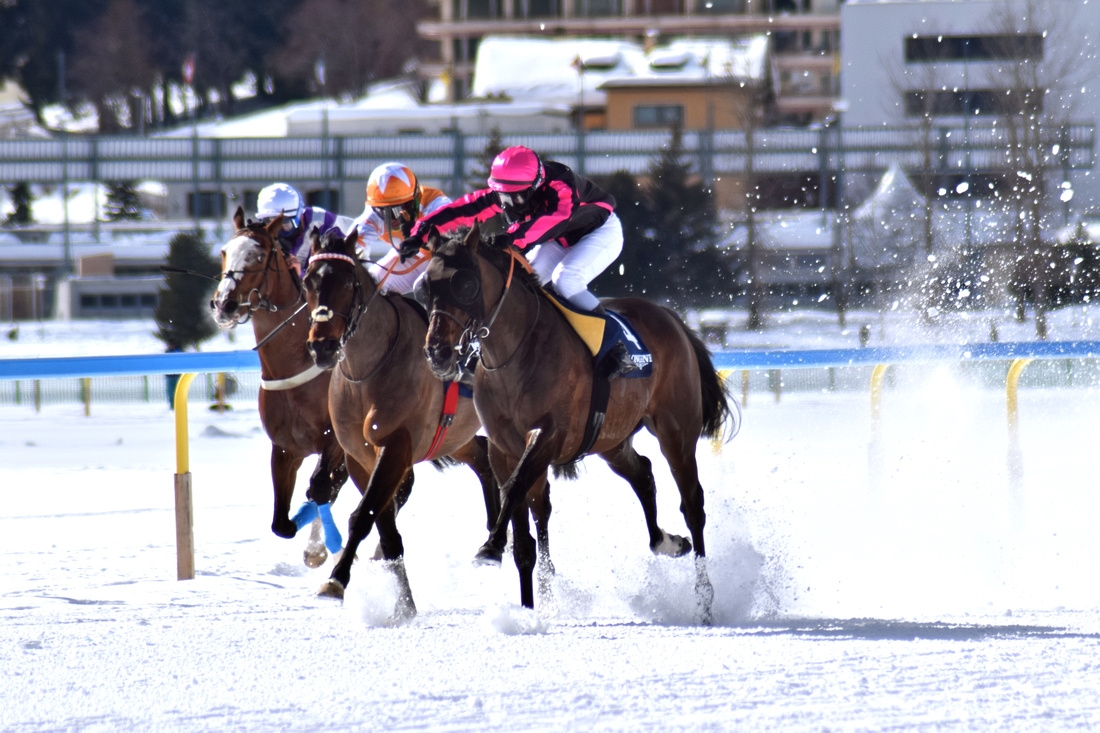 There were 3 horses in the battle of finish, Nimrod, Berrahri and Amun were all neck and neck for an exciting finish.  5 year old Nimrod came in first followed by Berrahri and then Amun.

I wasn’t concentrating and managed to miss the 1250 race as I was totally fixated on the skiers preparing for the skijoring race.  I am so fascinated by skijoring; essentially a winter sport where a person on skis is pulled by a horse, dog or vehicle, in this case, a horse.  The horses were first walked around by two leaders before the skiers took their places in tow.  Valeria Holinger in her bright pink match matchy outfit looked awesome.  The skiers looked so relaxed.  Fadri Casty was absolutely beaming as was Franco Moro behind Perfect Swing.  A couple were going around the parade ring one handed making it look so easy.  I’ve only once put a pair of skis on at the dry slope at Sandown Park around 20 years ago and it wasn’t pretty.  I can’t imagine being able to master a nursery slope let alone being pulled around a 2700 metre course by a galloping horse. 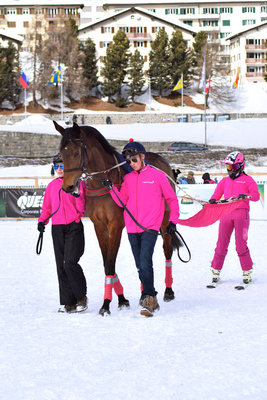 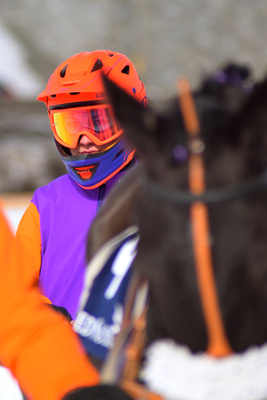 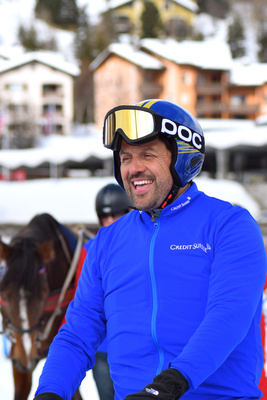 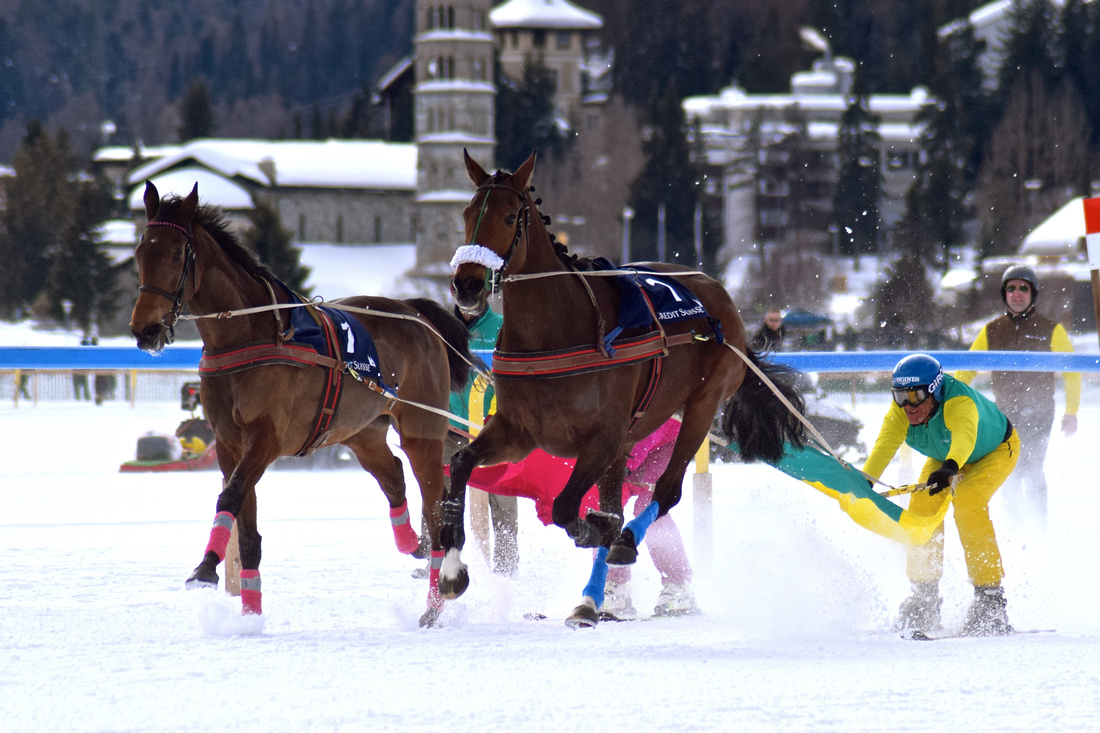 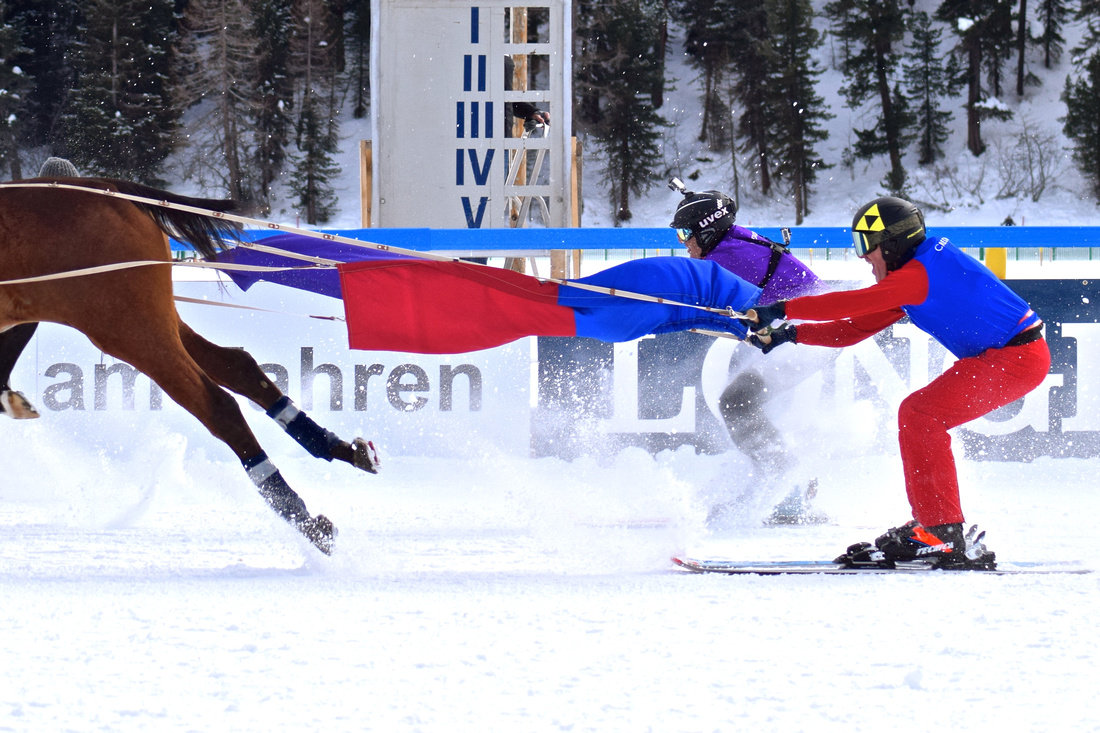 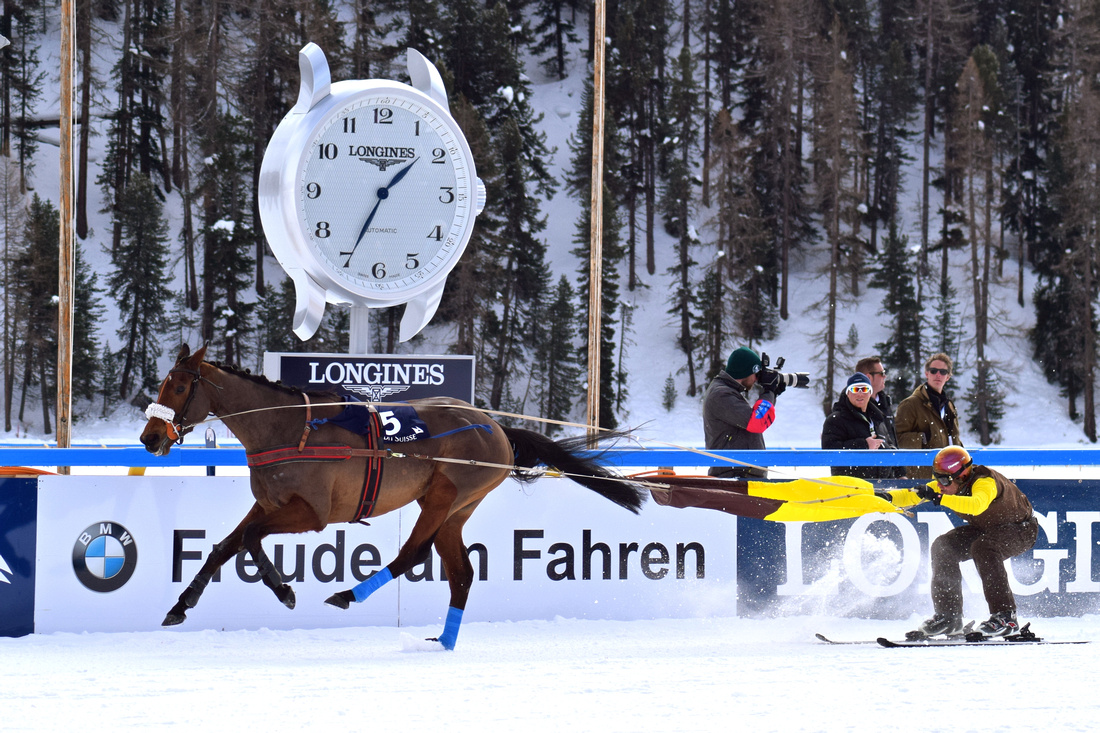 Silvio Staub & Fit For The Job

The race was so exciting to watch, my heart was pounding just watching it.  Alfredo Lupo Wolf was was the winner with 7 year old Pinot, Adrian Von Gunten second with Mombasa.  Valeria Holiger took the title of “Queen of the Engadine” having collected the most points over the 3 race weekends. 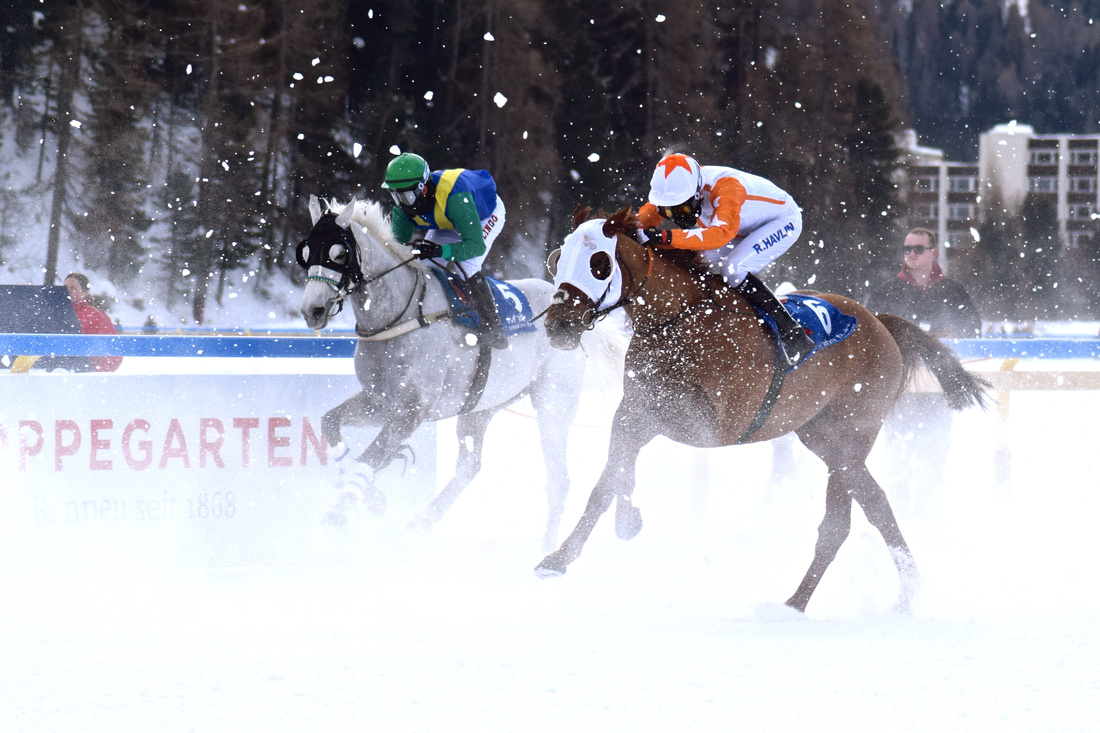 The final race of the day was the Swiss leg of the H.H. Sheikha Fatima Bint Mubarak Ladies World Championship IFHAR.  It was so close at the finish, there was a wait for the official result.  German jockey Rebecca Danz aboard Karin van den Bos' Dynamites finished first followed by Csenge Sutak onboard Lahoob trained by Beverley Deutrom. 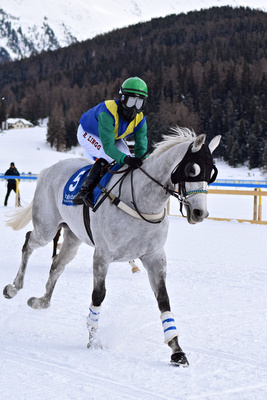 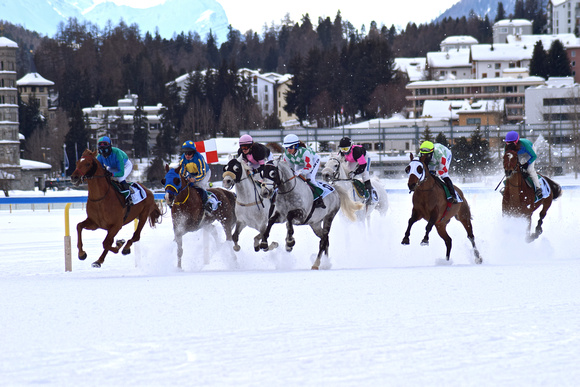 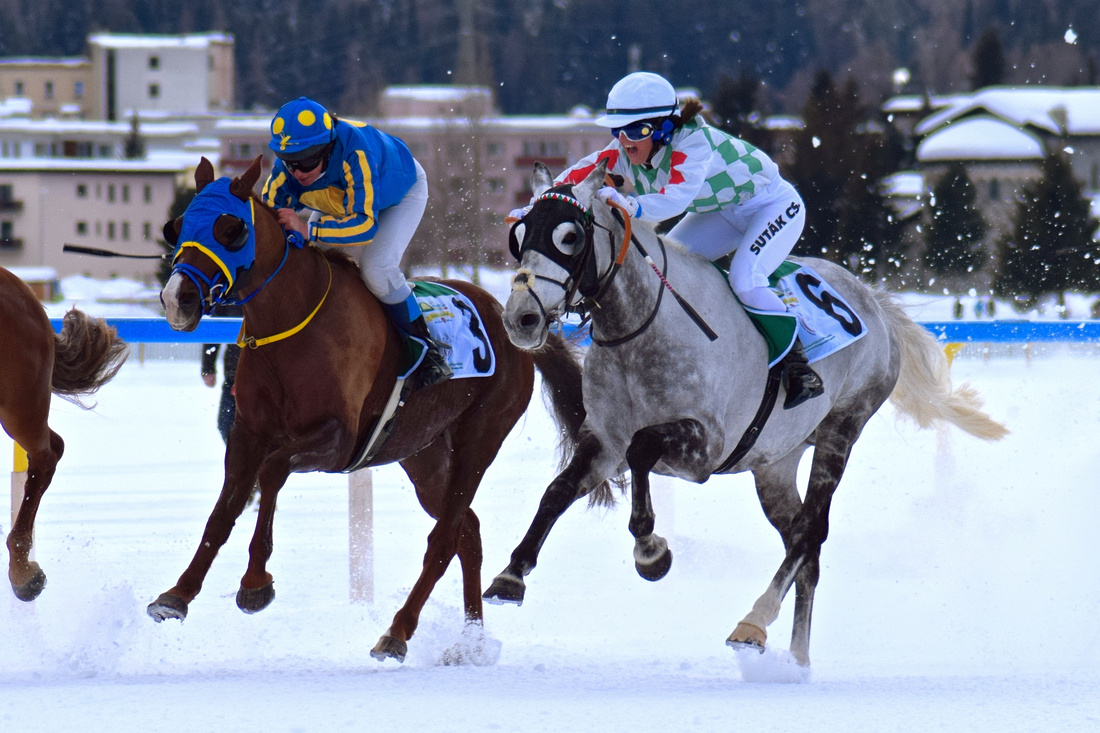 The day went so quickly, I couldn’t believe it.  Following the racing, I wandered around the shopping marquees and socialising areas listening to music from live musicians.  I then sat and soaked in the atmosphere with a glass of bubbly. 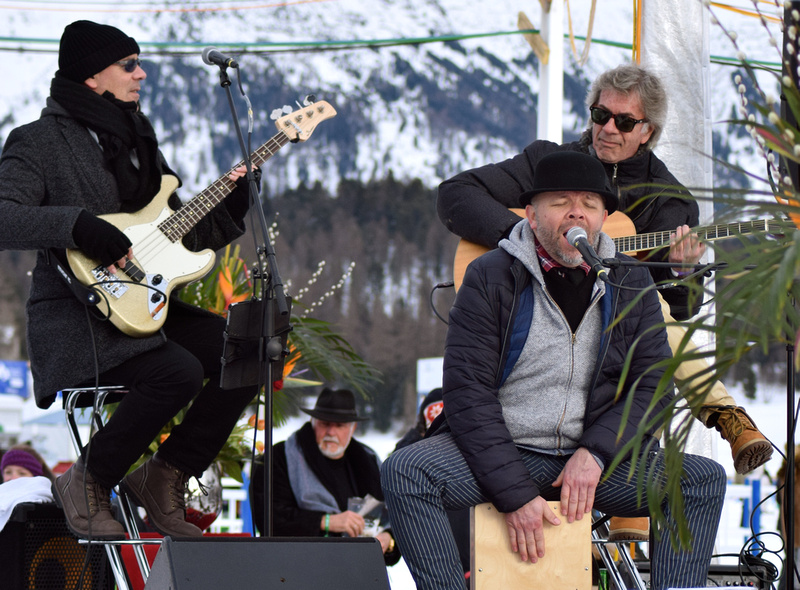 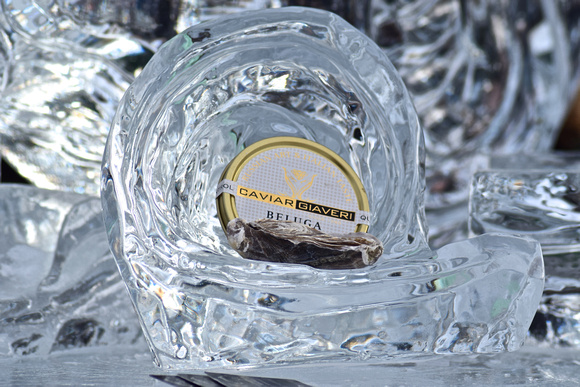 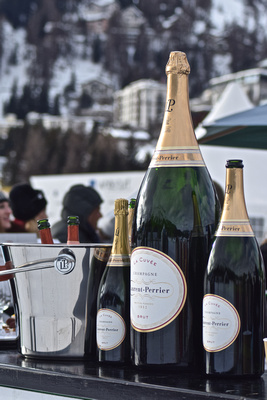 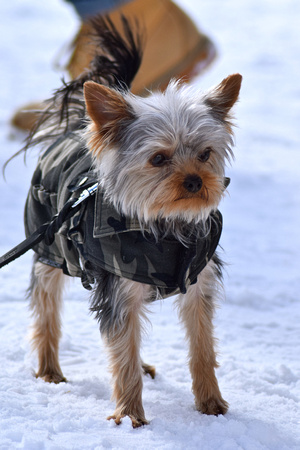 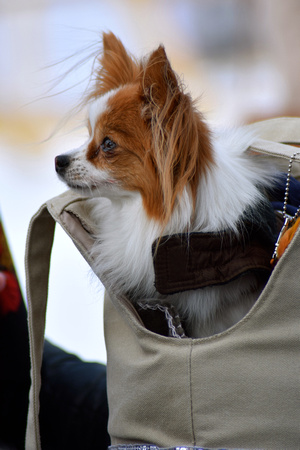 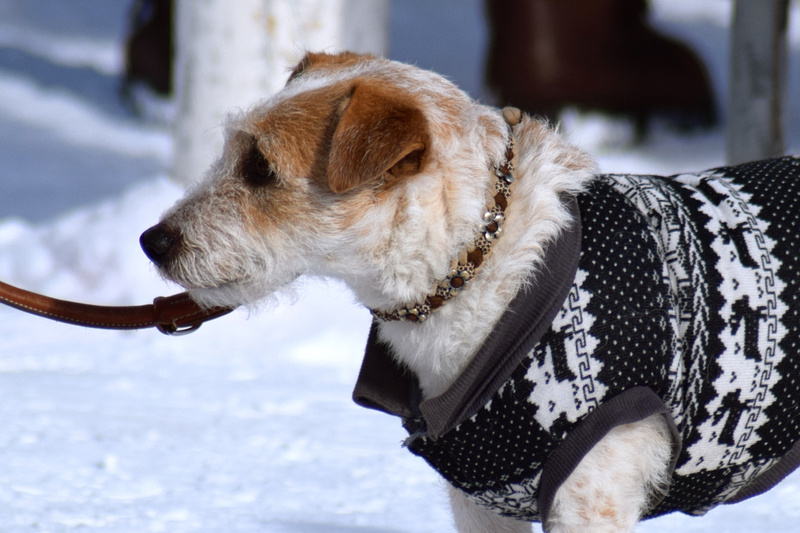 I left St Moritz at sunset and made my way back to Zurich.

I had the next day to wander in Zurich.  I took a walk down Bahnhoffstrasse; the main shopping street, also described as the shopping mile.  High end boutiques and luxury stores such as Gucci, Louis Vuitton, Dior, Chanel and Giorgio Armani combined with the strength of the Swiss Franc make this one of the World’s most exclusive and expensive shopping areas.  On this occasion with limited time and budget, I didn’t venture too far and sat down with a hot chocolate in Starbucks.

In the afternoon en route to the airport, I came across an absolute gem within Zurich HB station; a Sprüngli store. Anyone who knows me (or follows me on Instagram) will know that I’m obsessed with macarons, my favourite sweet treat.  There were hundreds if not thousands of them, all perfectly lined up in a vast array of flavours including salted caramel, champagne gold, champagne deluxe, vanilla and chocolate.  I picked a selection to savour on the way to the airport and a small box as a present for my for my fiancé.  On the train, I tucked into my selection.  Absolutely delicious!  So light and full of flavour.  Totally moreish. I noticed that the label instructed ‘Please enjoy immediately’ so unfortunately for my fiancé, I did. 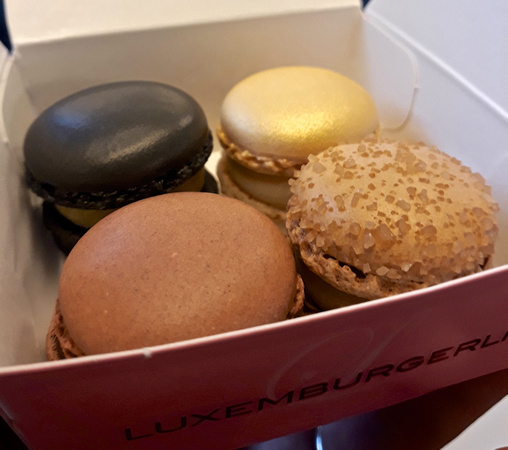 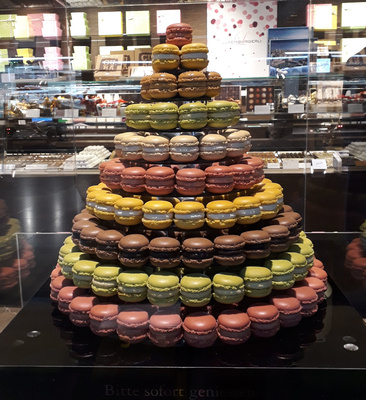 Having checked in at Zurich Airport, I got lucky once more and found another Sprungli store.  I corrected my mistake and bought him another box.

After a short flight I was back at Heathrow and headed home.

Back at home, I spotted that Berrahri was running at Lingfield Park Racecourse on March 7th.  Lingfield is a local track to me so I straight after work I popped down to Lingfield to catch him in the 4:30 race.  No placing for Berrahri on this occasion but great to watch him in action again. 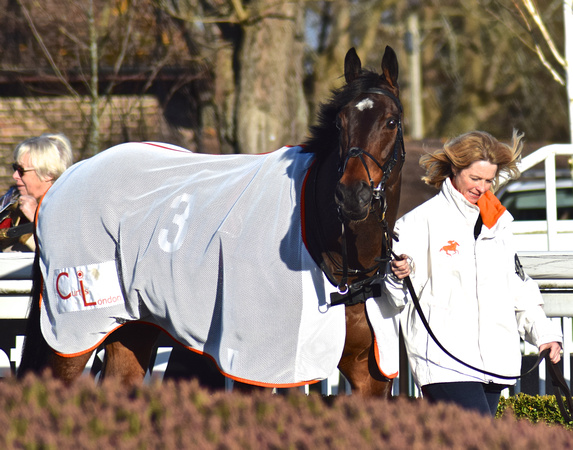 Tourism department of the Municiplity of St Moritz